Last weekend saw my debut appearance at the 24th annual Chicago Drum Show, so I thought I’d take a few moments to share my trip with you all.

I shipped 4 vintage English kits, a dozen snares and a selection of accessories from the UK 3 weeks ago, to an address in St Charles Illinois, then headed for Heathrow myself last Wednesday. 9 or so hours later, I landed in USA for the first time, tired, hungry and overwhelmed by the magnitude of what I was about to achieve; to my knowledge no-one had exhibited vintage English kits at this, the biggest vintage drum show in the world. 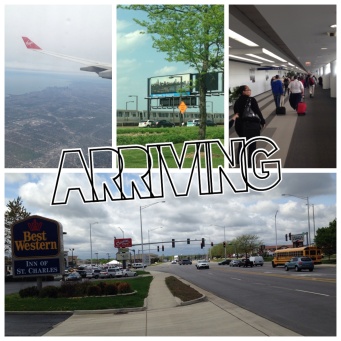 I took a 30 minute cab journey to my hotel, loving the sights as we drove; I went to a huge wal mart for some basics, which was the biggest shop I’d seen, although the cashier advised it wasn’t one of their bigger stores! That night I hade a lovely meal at a Chinese restaurant with a complete stranger I met in reception, then onto a bar for a drink and a discussion about guns and the fact that no one in the UK carries. In an effort to combat jet lag, I stayed up I Until 4 am (still only 10 pm local time) then collapsed from my 23 hour day. The following morning I awake with the worst headache, but by midday I was sitting in reception with the sun coming out drinking coffee and watching the traffic drift by ( huge trucks and cars cursing past in 6 lanes)!

I went out for a walk to clear my head, and saw no one else on foot all day except at the malls. Fresh sushi for lunch in a lovely little place next to a thrift store the size of a small supermarket, followed by dinner at an Italian. Great food, big portions and the best customer service provided a great start to my first weekend in the USA. I returned to my hotel to a message that some friends from the UK had arrived, but by now we’re sleeping off their journey across the Atlantic, so I headed to my room to relax and prepare myself for set up on Friday. 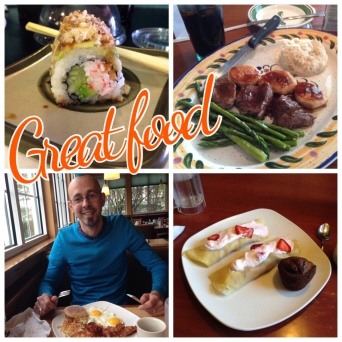 Friday morning I caught up with Dave and Alan, veterans of the show, this being their 20th year visiting; fortunately for me, they knew their way around, and promptly hired a car and offered me to share lifts to and from the show venue. They spent the whole weekend introducing me to people, helping carry drums, watching my stand so I could have a break and basically being absolute legends. I’m so grateful to them for this, they don’t realise how much they helped. After a substantial breakfast, a good natter and a visit to a mother Mall for some supplies, We headed to the Kane County showground where I got my pass and was pointed to one of two huge halls where there were six large boxes awaiting me at my stand. The one box had been opened at one end, but thankfully nothing was missing and the only damage was a small dent to the shell of one of the metal snares and a broken plastic hi hat cup. I spent the next 4 1/2 hours emptying the boxes and rebuilding the 4 kits, which had been packed ‘Russian doll’ style, one inside each other. Two vintage Hayman and two vintage Premier sets were set up along with period hardware, some cymbals, a dozen snare drums and some choice spares. With a large Union Jack draped on the snares table and my two banners at the back, my stand was finally ready. By the time I was done, the whole hall was full of the best collection of vintage drums I’d ever seen in my life. We headed back to the hotel, ate a huge meal at Colonnial’s diner next door, and crashed out ready for the show the next morning. 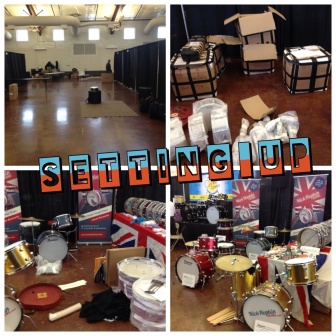 Saturday, up early on little sleep; bacon, eggs, hash browns, an English muffin ans plenty of coffee to fuel me for the day then off to the show for about 8.30. A couple adjustments to my stand, a quick catch up with some other exhibitors and the chance to grab a coffee before the doors at 10. What an amazing day! So many people came to check out my stand and the drums that I’d shipped over; many commented that it was the first Haymans they’d ever seen at the show in 24 years. Many knew nothing about them, so it was great discussing the shells, the vibrasonic coating, the unusual colours. A real pleasure chatting with so many people who were really into vintage drums. I had many American Premier players come and see me just to say hi, to check out the gear and stock up on some spares. I didn’t move from my stand all day and haven’t a clue what time the show finished, but by the time we were back at the hotel it must have been 8 pm.

We went out to dinner with Charlie, who ran the official Buddy Rich fan club for 20 plus years; he brought along a couple personal photo albums and shared stories with us late into the night. A really great day, spoiled only by there being no apple pie left at the diner by the time we got around to ordering desert! 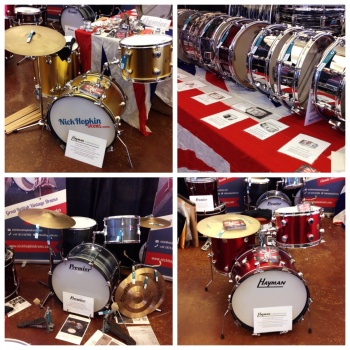 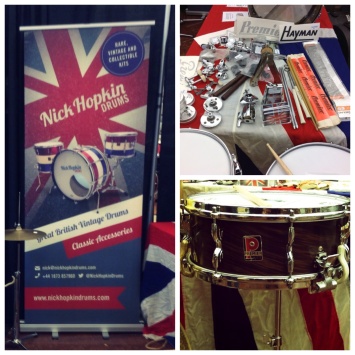 Sunday went even quicker, with lots of new faces coming and checking me out and having a good look at the gear I had. I made some good friends that day. Today I made the time to have a wander around the two giant halls to catch up with some exhibitors and take some pictures. I managed to catch about 5 minutes of the Jojo Mayer performance, which was amazing. Before I knew it, it was 5 pm and time to pack down. This didn’t take too long, as we left a couple kits with dealers to sell on consignment in the USA, so it was just a case of tidying up and getting out. Last chance to swap business cards and shake a few hands, then we were back to the hotel. We went out for pizza that night and ate until we couldn’t move!

On Monday, Alan and Dave left for the airport at 1 pm, but by 2 I was in a car heading for Chicago courtesy of a new friend, Jon. He decided to take me to Vic’s Drum shop, which is probably the biggest drum shop I’ve ever been in, and certainly the most efficient and customer orientated. This shop had a stick room with every stick available, floor to ceiling, with a giant table at centre that was one big practice pad! Then there was the percussion room, the hardware room, a pedal room with every pedal on the market in alphabetical display; add a soundproofed snare room with several hundred snares and a kit room that was huge ( acoustic and electronic). There was even a drum kit on the ceiling! Additionally there were 2 giant cymbal rooms housing just about every brand and range imaginable. They even sold drum mics at the counter, and had rehearsal rooms (135) above! Wow! We had a great chat with Vic and a guided tour and left very overstimulated. We went out and ate (via Jon’s house to check out some of his Premier collection) then talked drums to the early hours. 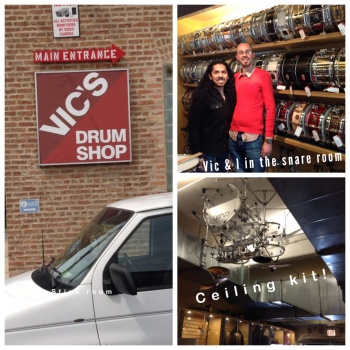 Tuesday I awoke to tropical temperatures. I went to Colonnials and had a final lunch to fill my growing tummy, then headed to the airport and took the overnight flight back to the UK.

I had an incredible time both at the show and in the days before and after; met some wonderful people, and ate some great food. Can’t wait to do it all again next year. If you’re into vintage drums then I’d strongly recommend you go to this show, I promise you won’t be disappointed.