This week Ive been restoring a Premier 2003 snare drum from the early 1980s for a client. It belonged to Rick Buckler of The Jam and was used both in the studio and live. However, over time it had been stripped for spares to service other drums in his collection and now needed a full rebuild.

The snare arrived in poor condition; the shell exterior had minor pitting  but  was very corroded with lots of tiny rust spots covering the drum. The interior of the shell was really rusty too. No lugs were present, only one hoop, no snare throw or butt end but thankfully a flobeam mechanism.

First job was to clean all corrosion from the shell and then clean and polish internally and externally. 8 Premier 2-20 lugs were fitted, along with a new snare throw lever and butt end. A reconditioned tone control damper was fitted and new Remo heads as per customers request; Hoops polished and fitted with 80’s Premier square head tension rods. Finally, a set of original Premier snare wires. 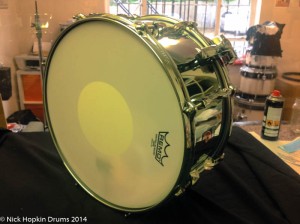 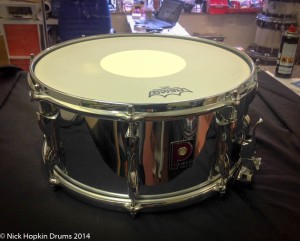 The drum is back to a good playable condition and sounds awesome with the deeper shell and die cast hoops.

If you’re interested in having a snare drum restored and given a new lease of life, you can review my services here – http://www.nickhopkindrums.com/snare-drum-service.html