It’s interesting running this shop, people kind of float on and off my radar. Back on my scene this week is Chris Ellul from UK band The Heavy, who’s been holed up in studios for the past year writing, recording and mixing their new album which comes out in April.

Chris turned up at the shop a few years ago, unannounced, as the band were recording at nearby Rockfield studios. He needed some parts urgently for one of his favourite studio snares, from what I remember. The shop looked very different to now, as I’d recently moved units so there would have been stuff everywhere. There still is, but it’s a little more organised these days. Anyhow, we fixed the snare and had a drum chatter over a cuppa, and since then we’ve seen a fair bit of Chris. He’s really into his vintage drums and so is a massive supporter of what we do here at Nick Hopkin Drums. He’s no badge freak – he plays what sounds good for the song.

Chris tells me that he used his 70’s Gretsch & 70’s Olympic sets on the new album which is released 1st April 2016. He also used a modest selection of vintage Rogers, Slingerland, Premier & Ludwig snare drums.

Check out the new single here – the drums really do sound great. I’m not sure which kit he’s touring, but he’ll have his tatty old Ludwig Supraphonic 400 on stage, with half the chrome hanging off it that sounds awesome – there’s a great story behind that snare drum. Ask him when you see him. Tour dates here 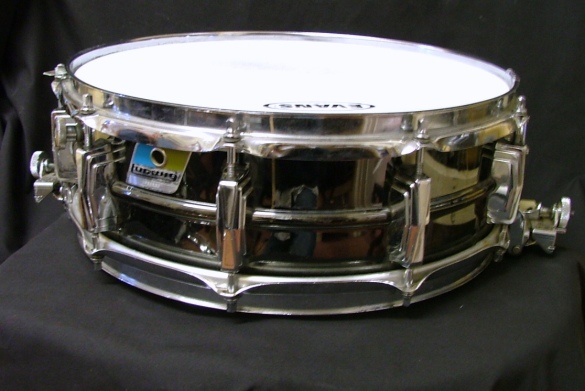 What a great Monday at Nick Hopkin Drums!

It may have rained all day, but my 3 year old Alice was able to come to work with me, as my new shop premises has a bathroom and kitchen. Small comforts. She wandered around eating all my biscuits and watched kids dvd’s while I boxed 2 kits for courier collection. The snare drum from a 1960’s Edgeware kit finally arrived, completing the set that I am stripping and refurbishing for a client. Beautiful black diamond pearl, pictures of it as it arrived….

By midday, Tanny arrived with Lois & Joel, lots of food and made us lunch. Still raining but we were happy. Surrounded by drums and family. What more could you ask for? The afternoon was spent arranging drums, tidying tools away, sorting out spare parts and photographing drums.Oh, and buying a couple more snare drums. I dashed out at 4 and picked up a kit and some odd drums and stands, then back to shop for courier to collect kits. At closing time the legendary Bristolian Richie Paradise dropped in for a cup of tea and a natter… Oh, and a 1970’s Ludwig set in Champagne sparkle…. photos of that one tomorrow, watch this blog!

Online at last. Classic kits, snare, accessories & spares. If you cant find what you want, contact me.